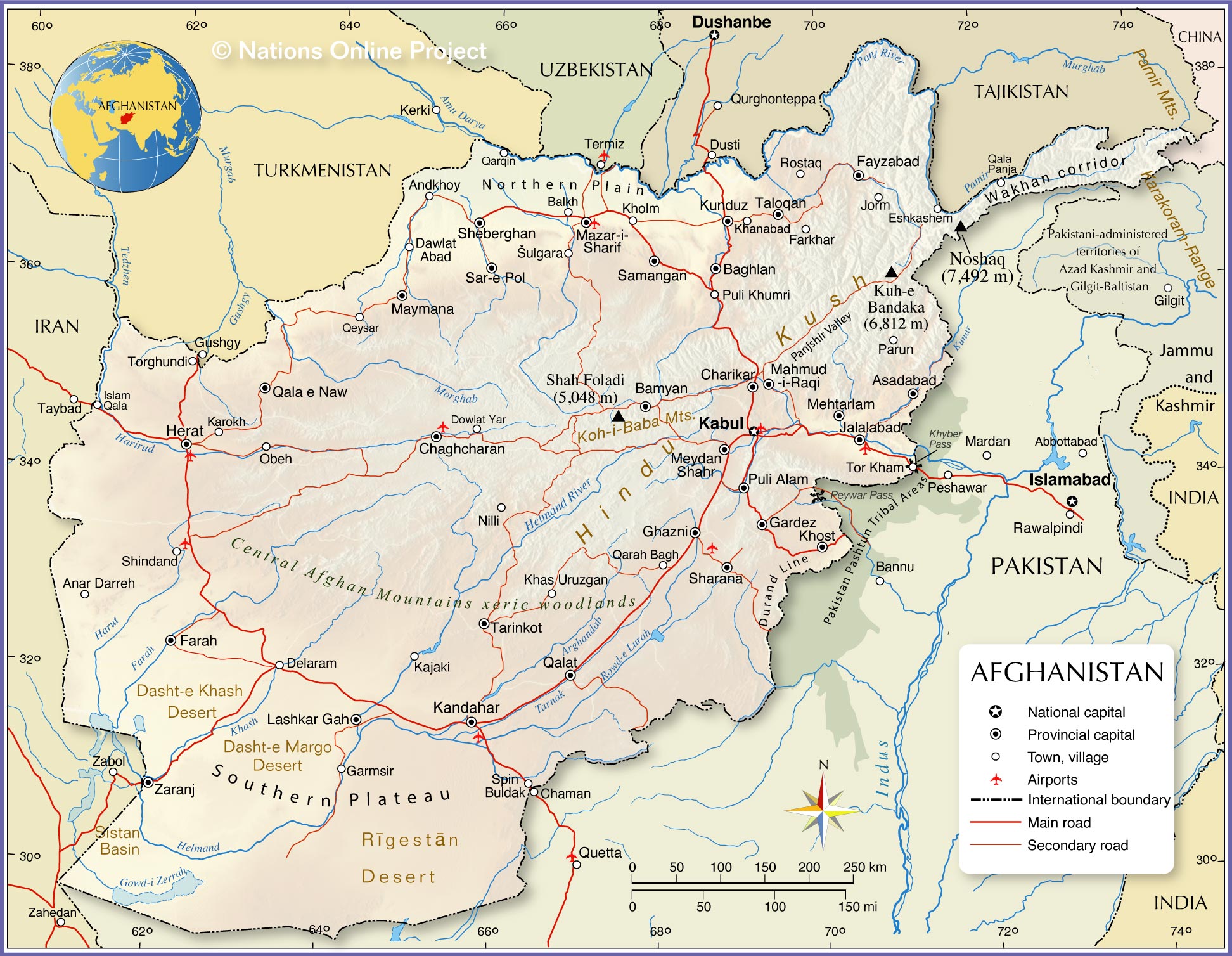 Afghanistan is a country of central Asia surrounded by Pakistan on the east and Iran on the west. Let us look at the other neighbouring countries and the geographical features of Afghanistan. Afghanistan is a landlocked country. The nearest sea route access is 480 Km.

“The Afghanistan-Pakistan border is a 2,670 km long and porous international border that runs through mountainous terrain and is largely unpatrolled. The border is known as the Durand Line. When the border was drawn by the British in the late 19th century, it cut through the traditional homeland of the Pashtuns.” –Source Nations Online

There are several ethnic groups in Afghanistan. The % sign represents the percentage of the population of various ethnic groups.

We can understand the ethnic makeup of the country by looking at the neighbouring countries. The Iranian influence on language as Persian came from Iran. The composition of Tajiks who originate from the land of Tajikistan and so on. Therefore Afghanistan is a place of confluence of cultures. There is no mention of Taliban either in the language or ethnicity of Afghan people.

Who is the Taliban then?

To understand the Taliban, we have to go into the history of Afghanistan. If we look back to post 1945, that is after the end of the second world war. There was a formation of two superblocks.

All the five central Asian – tans fell to the Soviet Socialist block under the leadership of Russia. With growing influence in the region, the Soviets decided to bring Afghanistan to their kitty. Therefore on 24 December 1979, the Soviets invaded Afghanistan. They fought with resistance forces till 15 February 1989 and then retreated. The USSR disintegrated on 26 December 1991. Also, to note that the USSR was formed on 30 December 1922. It is the Russian side of the story.

To counter the Soviets influence and reach in Afghanistan, the USA raised an army of extremists in PAKISTAN with the funding pouring in from the gulf countries.

The USA – PAKISTAN alliance and the Mujahideen – “The quality of their arms and combat organization gradually improved. However, as a result of, experience and a large number of arms and other war matériel shipped to the rebels, via Pakistan, by the United States and other countries. The Haqqani network, coordinated by a prominent commander of the Mujahideen, became a key instrument of this foreign assistance” – source Britannica.

The Taliban emerged in 1994 as one of the prominent factions largely consisted of students (Talib) from the Pashtun areas of eastern and southern Afghanistan who had been educated in Madarsas of Pakistan with money coming in from UAE, Saudi Arabia and, the USA. This was done to counter the influence of the USSR in the region, to prevent it from spreading to South Asia.

Taliban are the “hardline students of Islam”. Taliban is not an ethnicity or group of people. It is an ideology. If you, I or anyone else for that matter, falls into the trap of such radicalized teachings, we too are Taliban.

There were numerous instances where foreign rulers, kingdoms entered India via the Hindu Kush mountain passes. Therefore strategically, these passes are vital from the security perspective of India. The investment in Afghanistan is because of two reasons –

The following is the list of projects that India is developing in Afghanistan.

“No part of Afghanistan today is untouched by the 400-plus projects that India has undertaken in all 34 of Afghanistan’s provinces” – S. Jaishankar MEA India

Every investment of India in Afghanistan will go down the drain because it is illogical to argue with the Taliban government. Taliban’s administrators were once designated terrorists and engaged themselves in killing civilians across the globe. For the Taliban, the only law is the law of power and, they respect that. Conclusively, the Taliban are primitive people as they have never been through rigorous debates to come up with a law that they can justify, implement for everyone in the society. They took the easy crash course of blindly following Sharia Law. Let us not get ourselves into the debate whether the Taliban is right or wrong. We are just going to stick to the facts.

Irony of the day

Half of the human race (women) in the Taliban will remain in the captivity of Patriarchy, archaic laws. The world will approve of such a government to deal with their vested interests. How conveniently!

According to UNEP report, the natural resources that are present in the region are

The Taliban government will control these resources and assets after the 31st August 2021 deadline. The investment and technology to harvest or tap these resources will naturally come from China.

No country in the world became democratic without struggling. The citizens of Afghanistan residents, Afghan forces have to fight to establish the rule of law. Therefore no amount of outside interference can save Afghanistan from its fate. Russian, Americans, Indians all are trying to control the situation in Afghanistan. Finally, all of them realized this simple fact that it is the people of Afghanistan who will have to struggle.

There will be many such attacks in the time to come. Firstly, looking at the images, we can see that it is too soon to assert that the violence will stop. No wonder it will be such a disaster if the Taliban acquires Nuclear Technology with the help of Iran, Pakistan, China, Russia or Turkey.

To learn about trading go to our home page and follow the steps and links given there.