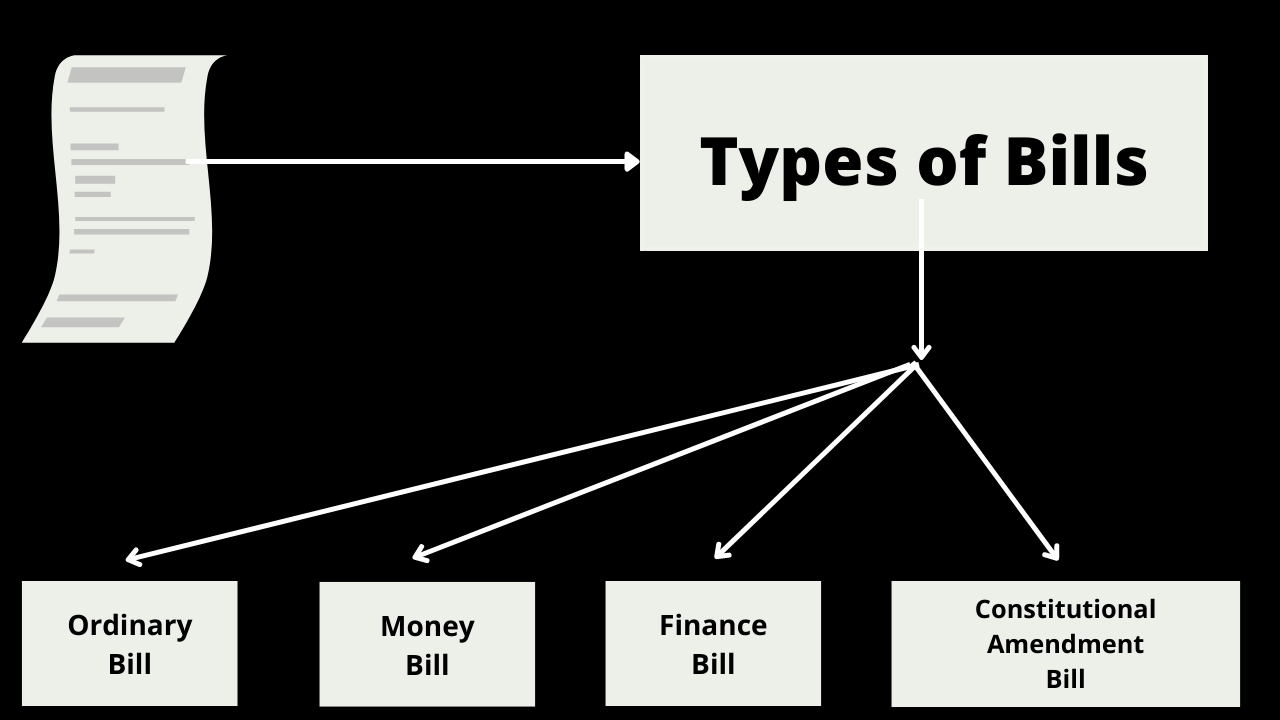 There are mainly four types of bills that can be introduced in the parliament of India. To better understand the types of bills let us first understand what exactly is a bill? A bill is a draft document that will become a law once it is passed by both the houses of the parliament i.e (Lok Sabha & Rajya Sabha) and signed by the President of India. Bill = Draft Statute or Draft Document or Draft Proposal all the things are the same.

There is one more classification of the bills based upon the bill’s origin. If a minister tables a bill it is known as a Public Bill or Government bill, If any Member of Parliament (Private Member) other than the minister tables a bill then it is known as Private Bill or Private Members’ Bill. These are the two types of bills & below in the image is the difference between these two types of bills.

Note – Without an understanding of the types of the bills, and how they are passed in the parliament it will be very difficult for the students to understand the legislative powers of the President of India.

Ordinary bills can be introduced in the Lok Sabha as well as Rajya Sabha (either house of the Parliament). A bill has to undergo five stages of scrutiny. The 5 stages are as follows.

Money Bills are defined in Article 110 of the Indian constitution. In the Indian constitution the term used to define a Money bill is “Financial Bills”. However there is a category of Finacila Bills separately as well. Only those financial bills that deals with the matter contained in the Article 110 are known as Money Bills. There are a few points that are specific to money bills only. They are as follows.

Note – To understand the Money Bill study the Ordinary bill carefully and then read the features of Money Bill & the difference between the two types of bills.

Financial Bills are of two types. Even though Money Bills is also a financial bill but it has been studied & classified separately as there are a number of provisions, clauses & procedures. However let us look at the other two types of Financial bills .

Ordinances not the Types of Bills

An ordinance is a temporary law issued by the President when the houses of the Parliament is not in session. The Ordinance making power of the President is drerived from Article 123 of the Indian constitution. The subtle differences in the ordinance power of the President of India & the governor of the states are clearly explained in the article published on the byjus ias platform. Here is the link https://byjus.com/free-ias-prep/ordinance-making-powers-of-the-executive-in-india/

We Earn from your support

Hey Types of Bills readers if you don’t have a demat account in the Indian securities markets, we at Lrnin.in work along with the following brokers to earn our bread & butter. We also offer discounts to everyone who opens their accounts using the link below.

Tags: constitutional amendment bill, finance bill, how a bill becomes a law?, Indian Polity notes, lrnin, money bill, ordinary bill, types of bills, what are ordinances?, what are the types of bills